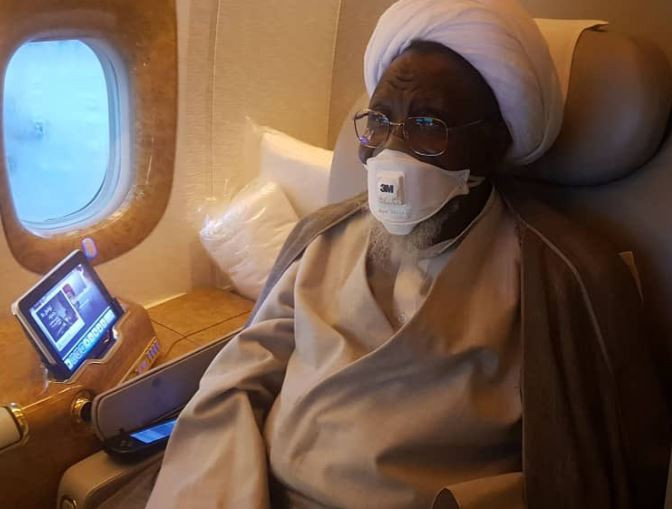 The proscribed Islamic Movement has thanked human rights lawyer Femi Falana and other people of conscience that made possible the departure of Sheikh Ibrahim El-Zakzaky and his wife, Zeenat to India for medical treatment.

“We wish to use this opportunity to thank all people of conscience, particularly the team of lawyers being led by Femi Falana SAN, some very senior citizens, diplomats, human rights activists and organizations, journalists and the general public who doggedly stood by us in the campaign for justice for the victims of Zaria genocide. Thank you and God bless.”
“In spite of the attempted efforts at frustrating this emergency medical journey by the Kaduna state government, which tried to unilaterally put conditions to the journey even though it lacked such powers, the journey has gone on without much hitches”, IMN said.
“This emergency medical journey is consequent on the facts that both the Sheikh and his wife are known to be clearly very ill in detention, sequel to the brutal wounds unjustifiably inflicted on them by the state agents in the name of Nigerian army, the resultant prolonged dehumanizing detention in the custody of the Department of State Security (DSS) and the obvious poisoning of the Sheikh. As a result of all these physical and psychological stresses, the Sheikh suffered series of mild strokes and is at the risk of further recurrences.
“At the same time, he lost one eye following the military attack and is at a severe risk of losing sight completely in the other. He is now found to have more than twenty times the toxic levels of lead poison in his body! Similarly, the wife has been under excruciating pains with shrapnel deeply lodged in her body for all these years of inhuman conditions in detention. She now is able to ambulate only with the use of a wheelchair, even to the airport.
They have been battling ailments that could not be treated in Nigeria, as posited by the foreign medical experts that earlier in the year assessed their health condition. Undoubtedly, both risk losing their lives had the medical journey been further delayed or denied”.